An all-screen design with a stunning 10.9‑inch Liquid Retina display 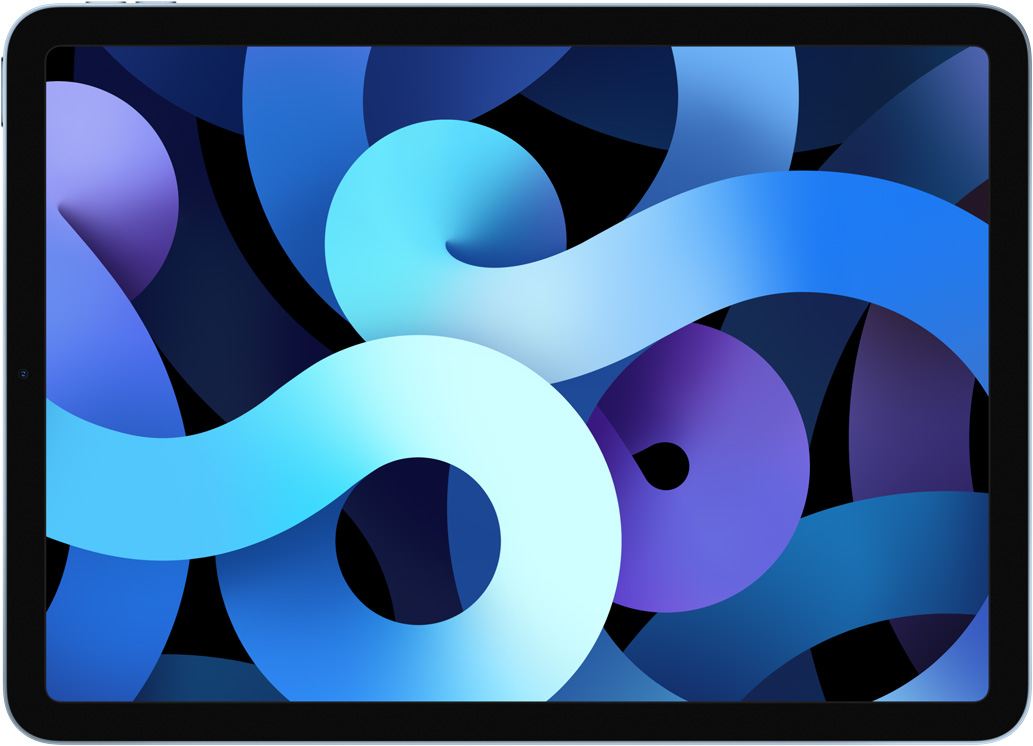 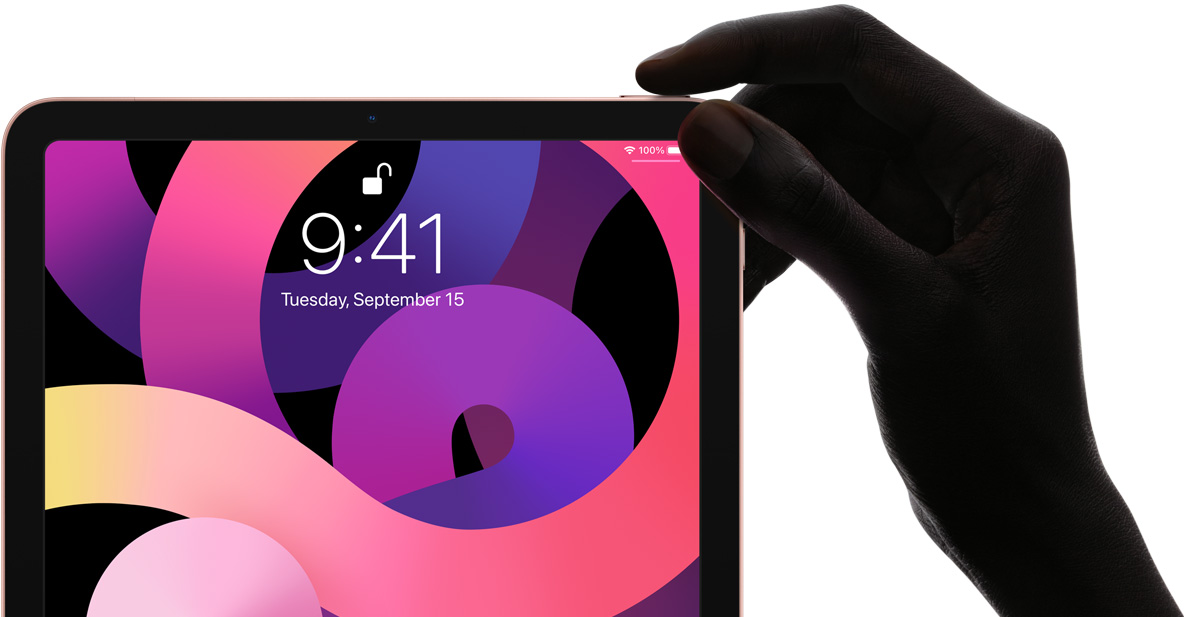 powered by our most advanced chip ever A14 Bionic 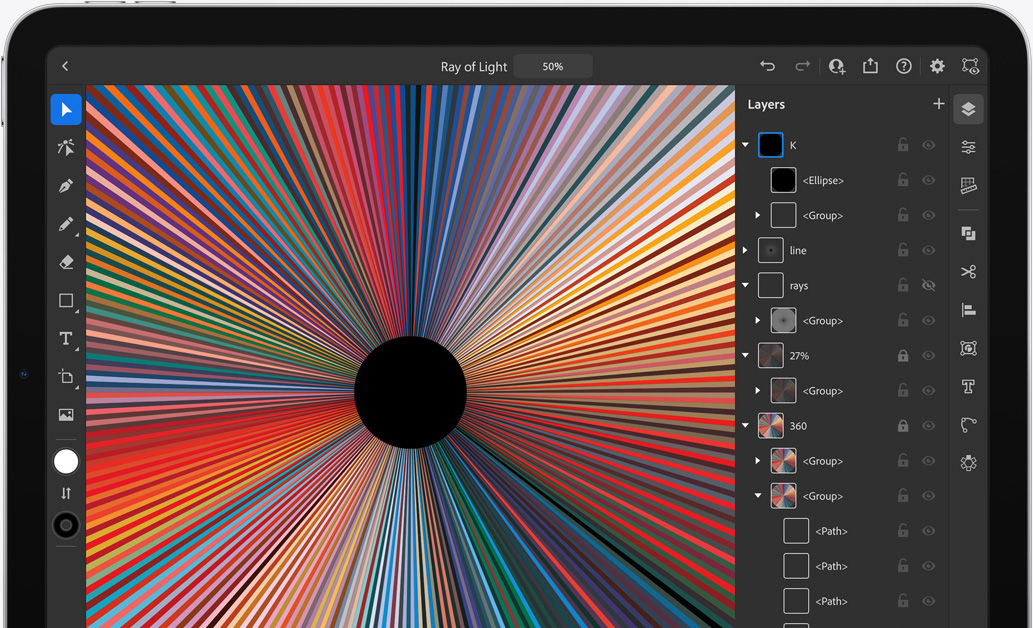 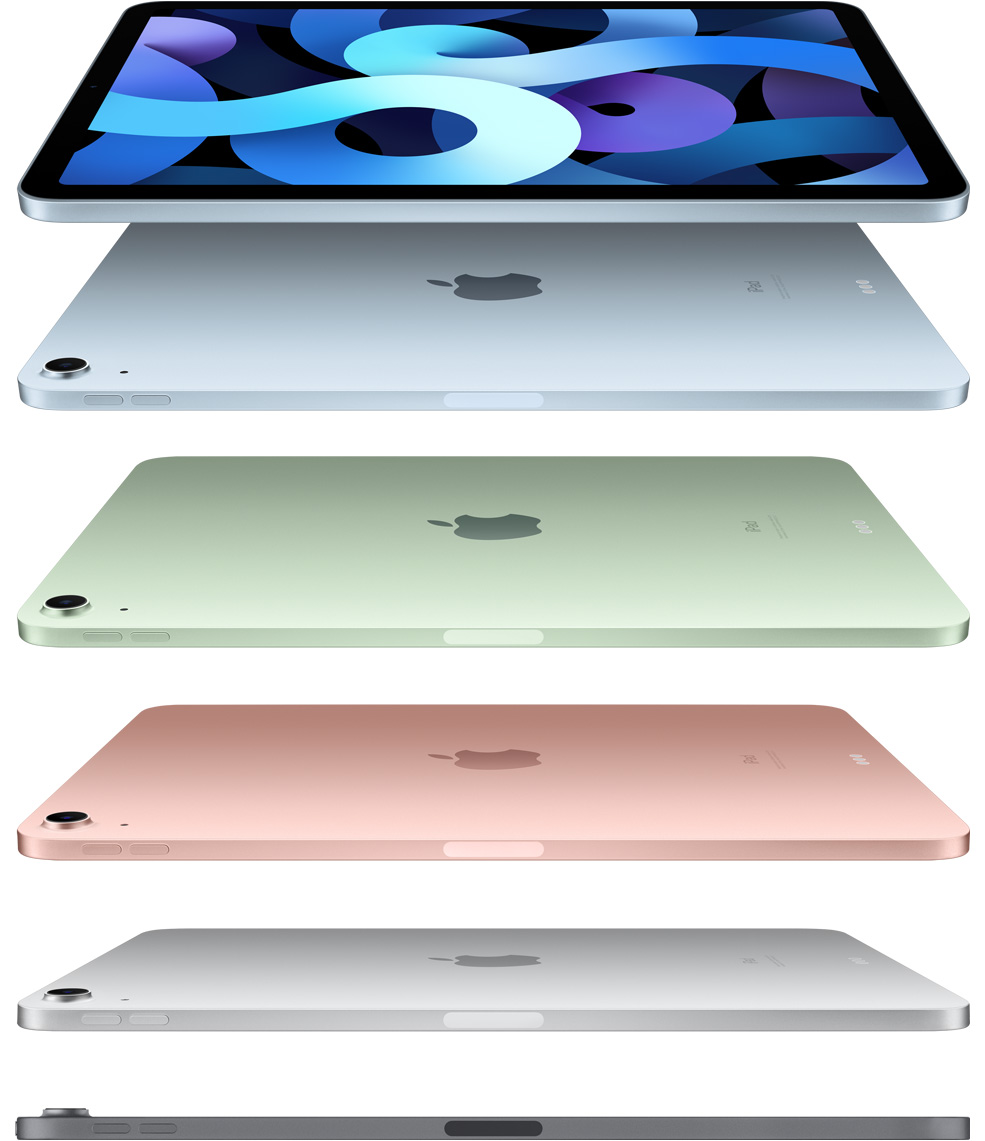 iPad Air does more than a computer in simpler, more magical ways. And now with more features and capabilities, it’s more versatile than ever.

Your creative studio on the go.

With A14 Bionic, you have the power to bring your ideas to life. Shoot a 4K video, then edit it right on iPad Air. Use the second‑generation Apple Pencil to paint and illustrate with dynamic brushes and subtle shading.1 And with the enhanced graphics and machine learning performance of A14 Bionic, you can unlock new creative possibilities with photo editing, music creation, and more. 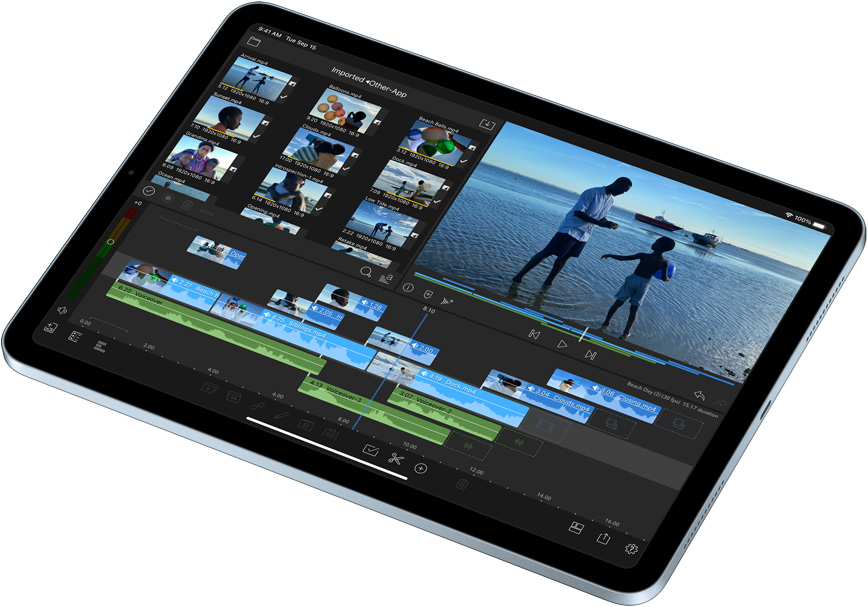 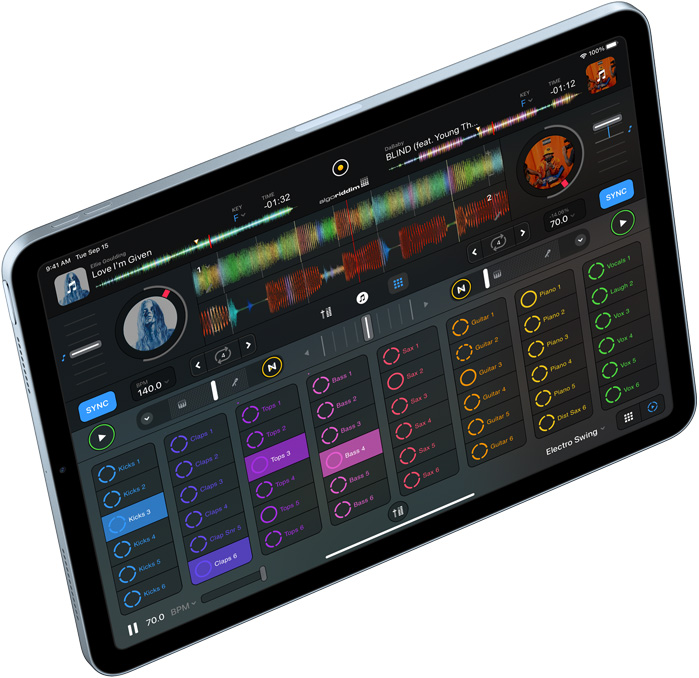 The notepad where your best ideas are born.

With Apple Pencil, you can easily take notes, organize your thoughts, and mark up screenshots, email, and more. And with iPadOS 14, your handwriting becomes as powerful as typed text. Convert your sketches into perfect shapes, turn handwritten notes into typed text, and write in any text field with Scribble. 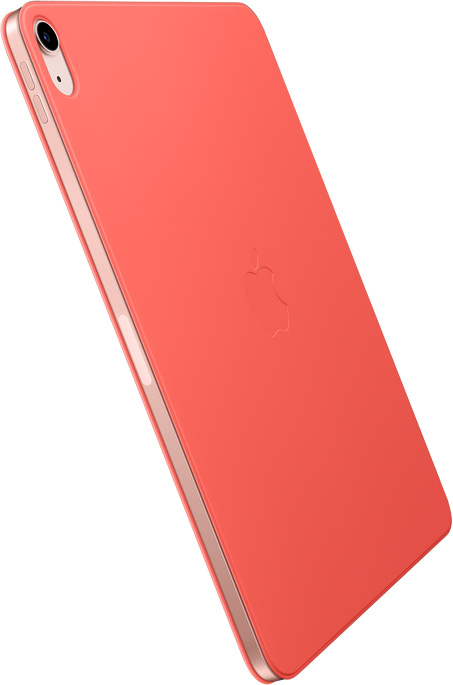 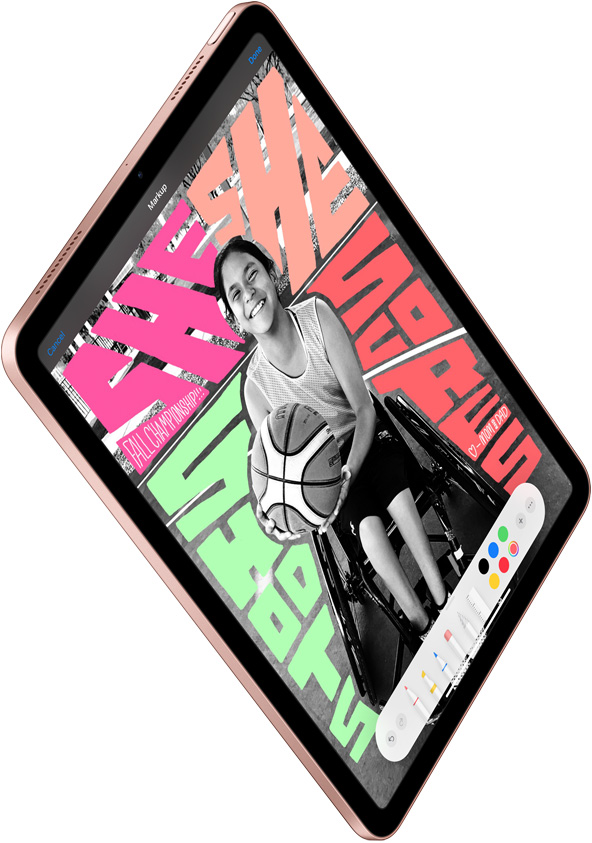 With the incredible versatility of iPad Air, you can work any way you want. Use the Smart Keyboard Folio, or attach the Magic Keyboard for responsive typing and a built‑in trackpad.1 It’s perfect for the things you need to do, like sending an email. Or the things you want to do, like writing a short story. And with all‑day battery life,2 iPad Air is ready to work for as long as you need it. 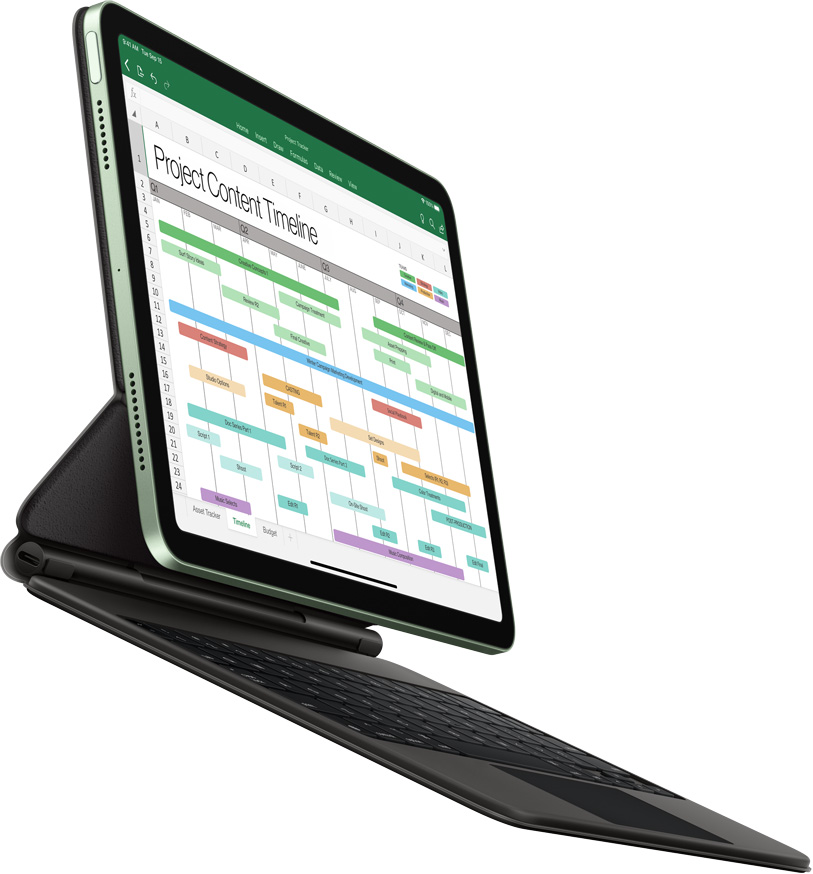 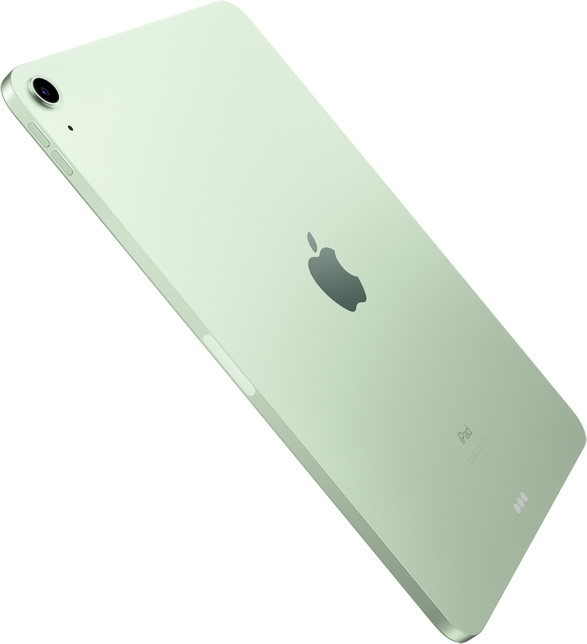 Get to work.
Get to class.
Or get together.

iPad Air is the perfect way to stay connected with Wi‑Fi and LTE.* Host a FaceTime call, join a video conference, or start a group project with friends or classmates from anywhere. Advanced cameras and microphones keep faces and voices crystal clear. iPad Air features superfast Wi‑Fi 6 — and with LTE,3 you can connect even when you’re away from Wi‑Fi. 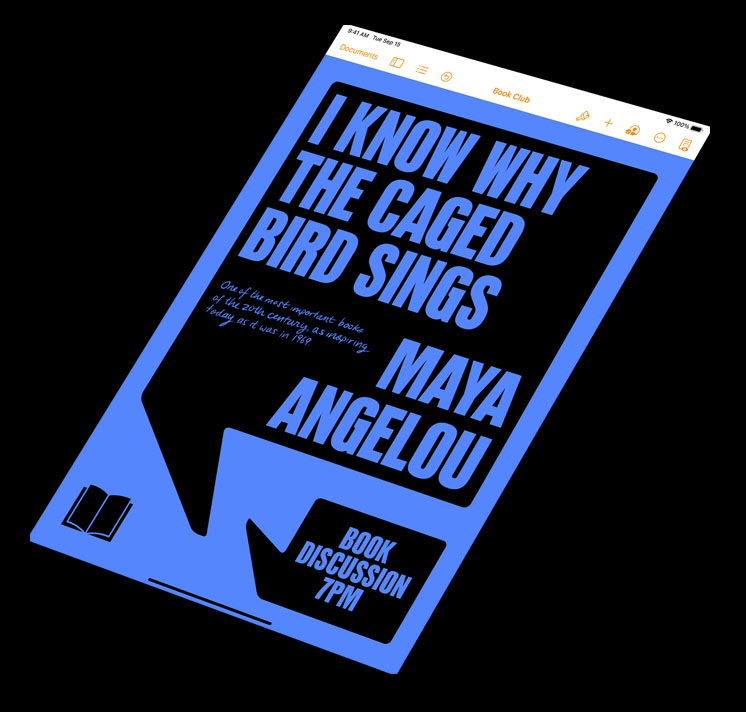 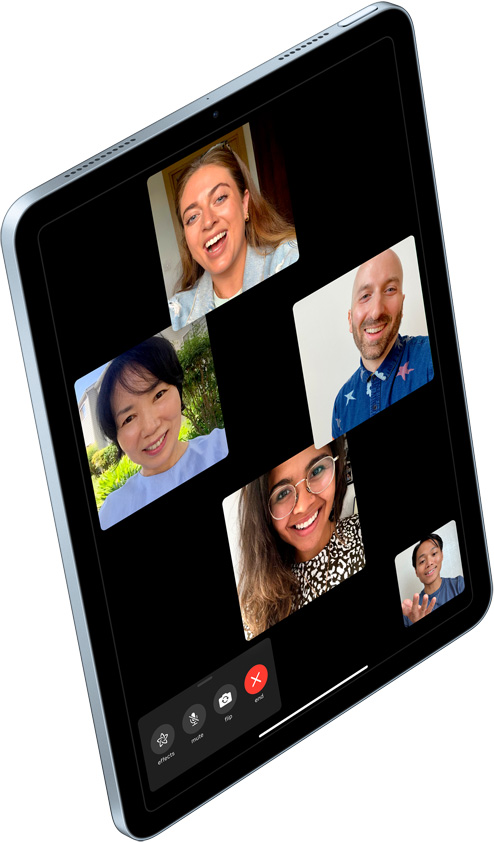 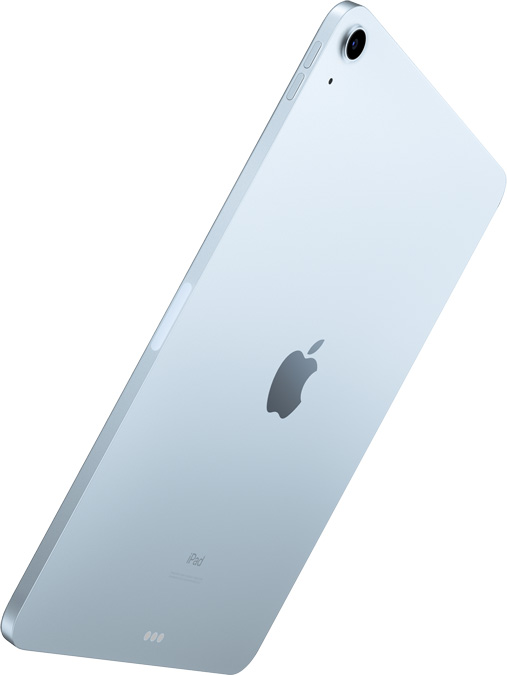 Power up your leisure time.

The incredible graphics of A14 Bionic and the stunning iPad Air display make all your entertainment completely captivating. Watch movies on the gorgeous Liquid Retina display with P3 wide color and enjoy an immersive audio experience with high‑quality landscape stereo speakers. Or play games with console‑level graphics, and even connect a controller.4 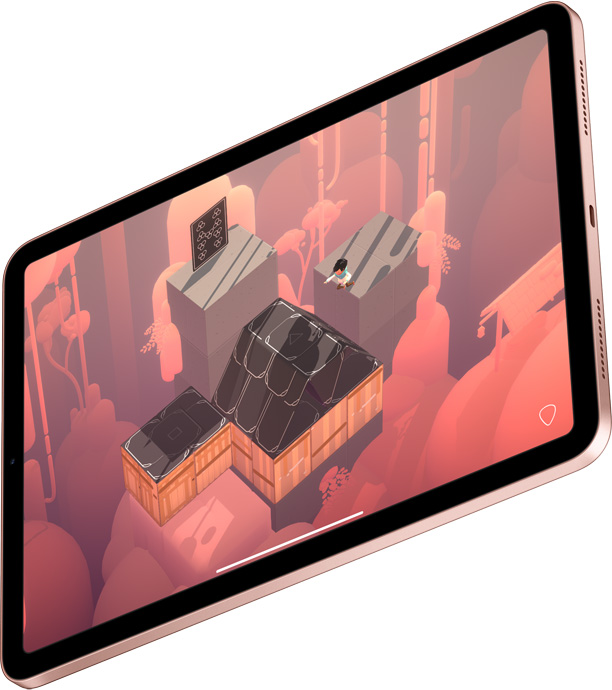 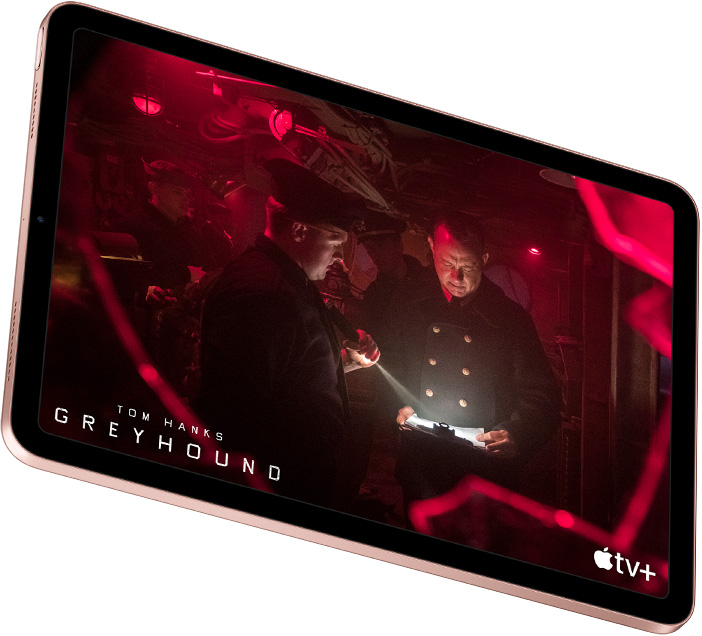 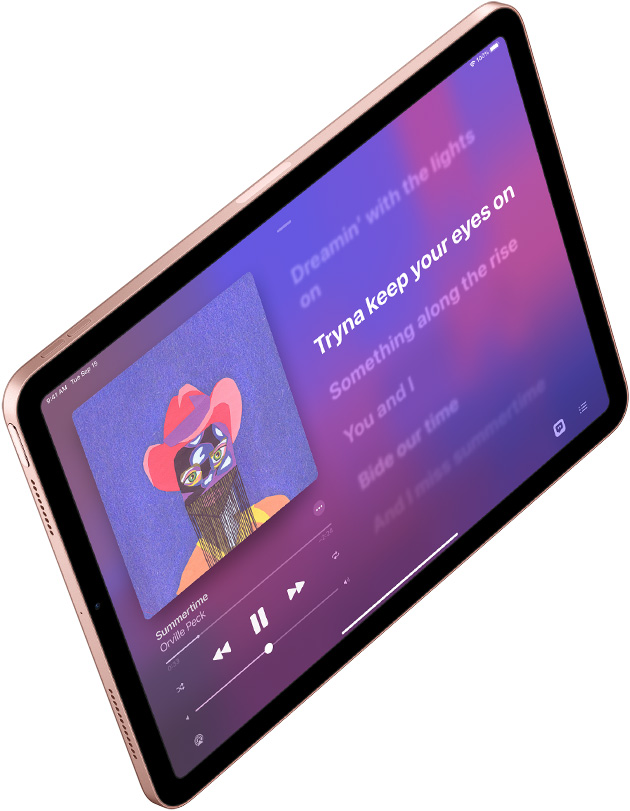 Here’s what you get with iPad Air.

Touch ID integrated into the top button for fast, easy, and secure authentication. 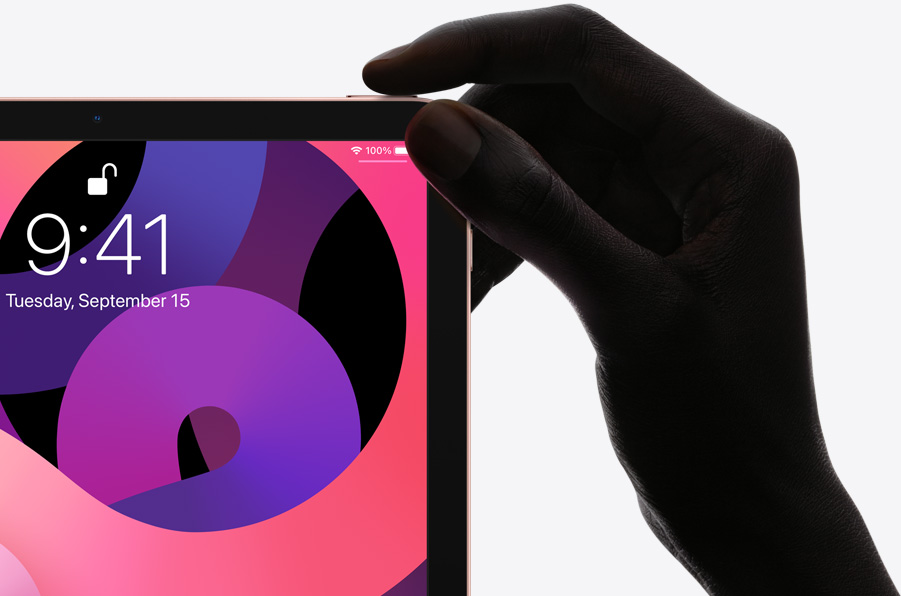 Take notes, mark up, or create a masterpiece with the second‑generation Apple Pencil. 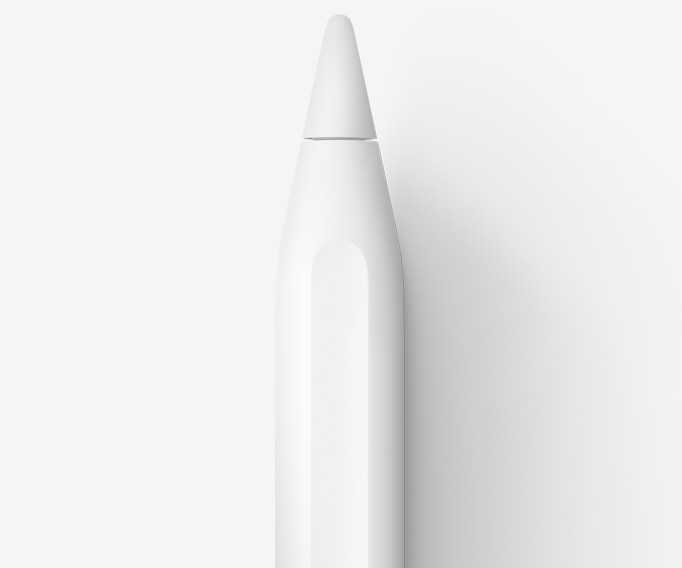 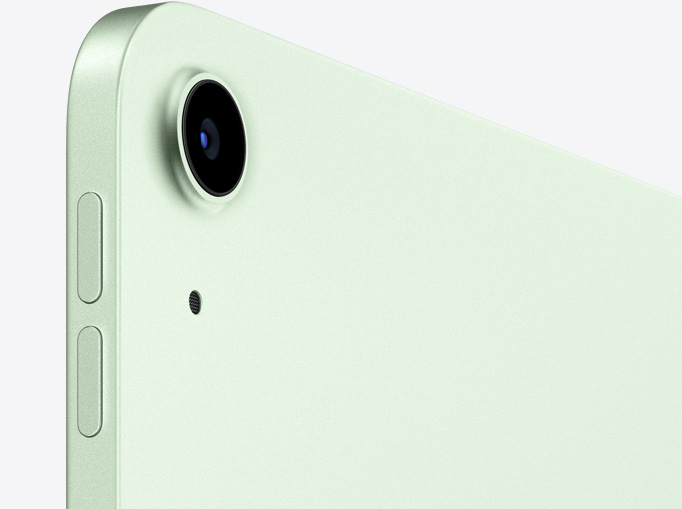 Compatible with both Magic Keyboard and Smart Keyboard Folio. 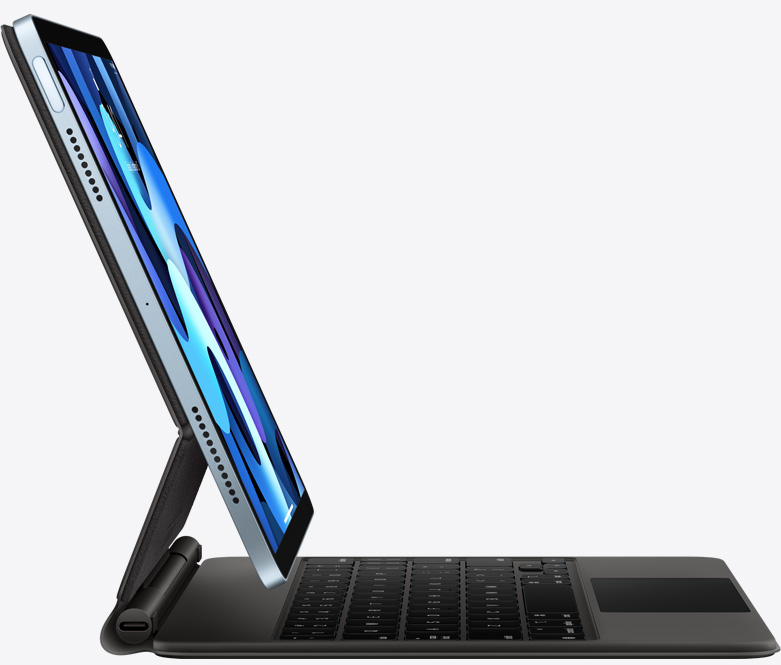 USB-C, which allows for fast connections to cameras, displays, and more. 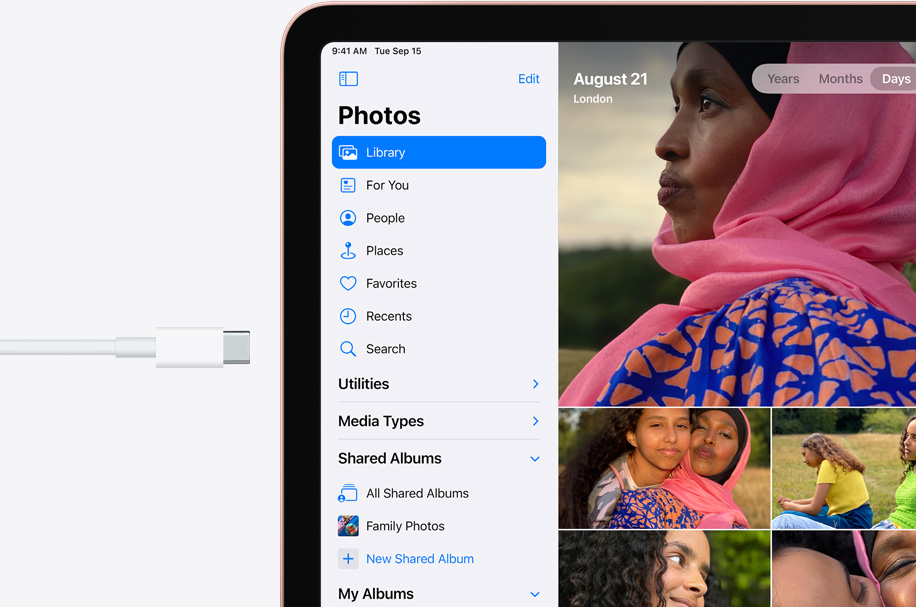 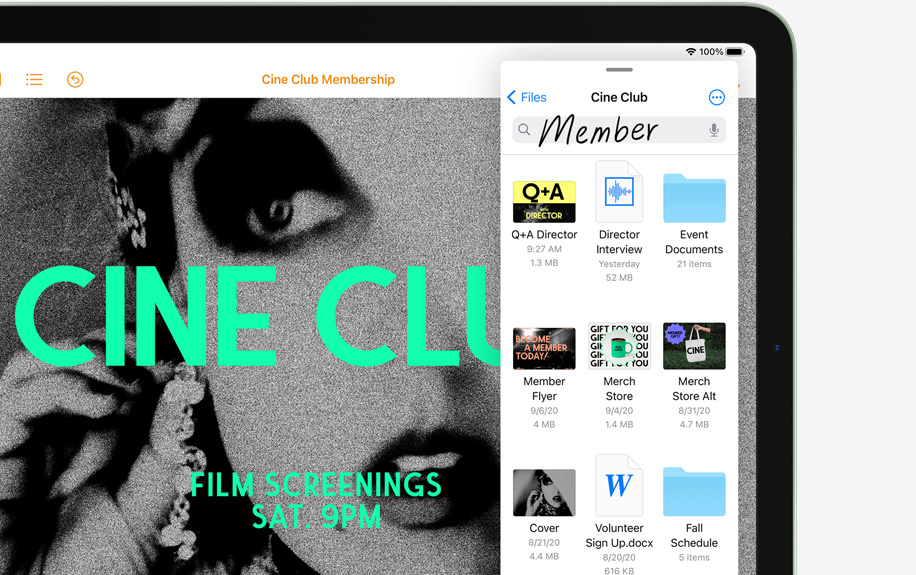 Fast internet connectivity with Wi‑Fi 6 and LTE speeds up to 60% faster.3 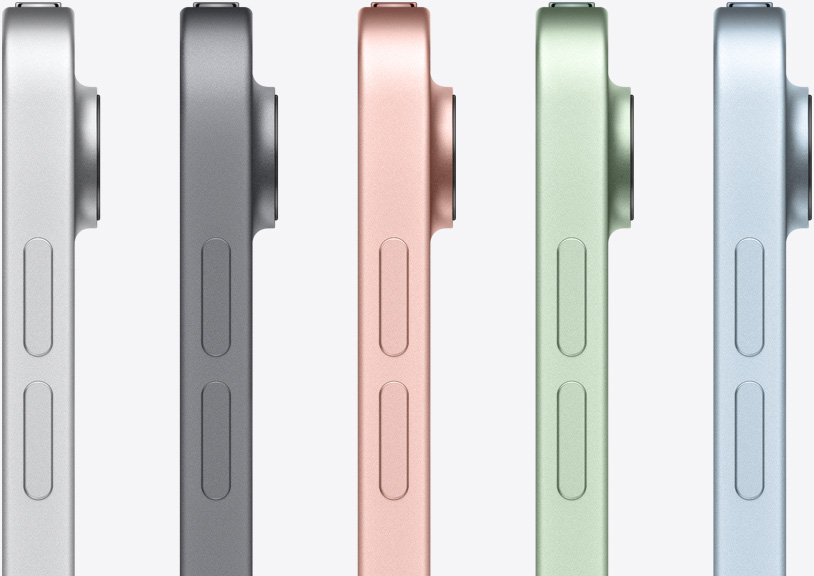 Use AR to see the new iPad Air and Magic Keyboard 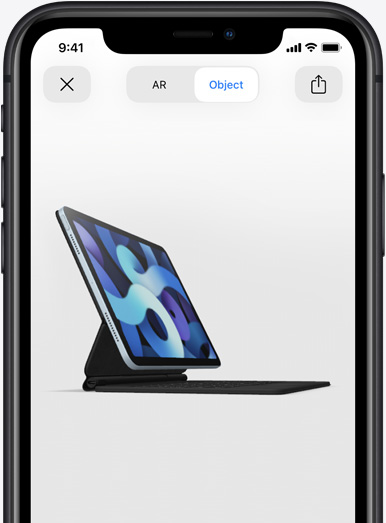 Like every Apple product, iPad Air was designed with your privacy and security in mind. It’s not always easy. But that’s the kind of innovation we believe in.

Technology is most powerful when everyone can use it. That’s why iPad Air comes with accessibility features that support vision, hearing, mobility, and learning needs. 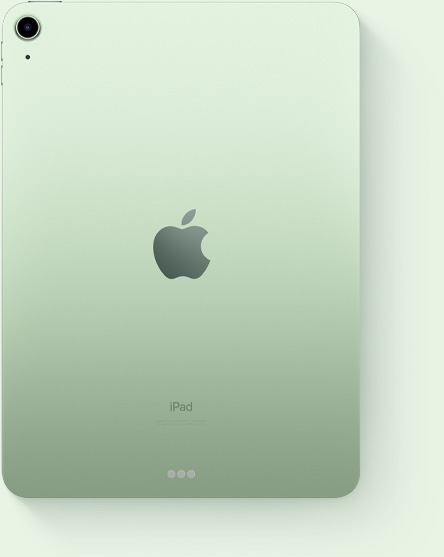 The iPad Air display has rounded corners. When measured diagonally as a rectangle, the screen is 10.86 inches. Actual viewable area is less.

A14 Bionic chip with 64‑bit architecture

Tap to focus with Focus Pixels

Charging via power adapter or USB‑C to computer system

Accessibility features help people with disabilities get the most out of their new iPad Air. With built-in support for vision, hearing, mobility, and learning, you can create and do amazing things. Learn more

iPad Air is designed with the following features to reduce its environmental impact.10 See the iPad Air Product Environmental Report

Made with better materials

100% recycled aluminum in the enclosure

100% recycled tin in the solder of the main logic board

Trade in your eligible device for credit toward your next purchase, or get an Apple Gift Card you can use anytime.** If your device isn’t eligible for credit, we’ll recycle it for free.

See how it works

Apple and the Environment

We’re committed to making our products without taking from the earth, and to become carbon neutral across our entire business, including products, by 2030.